obert Anthony Coles was born at Ryton on Dunsmore in the years following the Second World War, and from the age of three moved to Miles Meadow, Bell Green. A recent illness prompted Robert into thinking about his past, particularly how it appeared that all the schools and work-places in his life had been knocked down or rebuilt.
In beginning his research, he couldn't believe what came up when an internet search for Courthouse Green Junior School brought him to this website, and the great contributions that several people had already made, including the class photo that turned out to be his school year. Sixty five years had passed, and how many schools in Coventry? What an incredible chance!
Over the past year he thought long and hard about what to write, so Robert hopes that these memories may be useful to whoever reads them. His friends and relatives tell him that he has a wonderful memory, so here we go, beginning with the.... 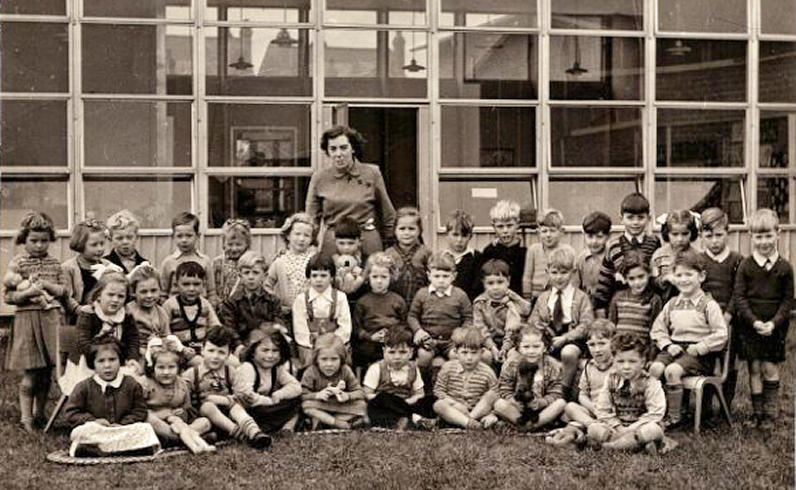 One of the classes in Robert's year at Courthouse Green School. (Click the photo to find out who most of the pupils are.)

My first day at school was sitting next to Tony Jamieson - we went through ten years together, but have never seen him since. I believe he went to Portsmouth and joined the Navy.

We were in the classroom which was on the corner of Bell Green Road and Sewell Highway. The sandpit was outside.

Someone on this website wrote about the terraced houses, and the music teacher. This is correct; her name was Mrs Stafford, and she taught me. That consisted of shouting from the kitchen while cooking her husbands dinner; "Carry on, I am listening". Meanwhile, five or six kids would be waiting for their turn.

Down from there, outside the gate, was a Tuck Shop - Kelsey's. Further down was Bernard's the butcher. My dad plucked chickens for him at Christmas. Beyond that a ladies material / curtain shop - Eileen's. And at the bottom, opposite the Golden Fleece pub (long time gone now), was another shop called Dimloes.

We had swimming lessons at Livingston Road. Never been there since.

My overall memory of the school was not too happy, unlike Caludon Castle, which I loved. Mr. Bailey didn't like me and it showed. I got my own back a bit (to my later cost) by pretending to be ill, to escape this little bully. Unfortunately it meant I fell way behind. It took four years at Caludon to catch up, which I did.

Robert would love to hear from anyone wishing to share their memories of Courthouse Green School.
Associated pages....
Home | How this site began | Bibliography | About me | My music | Admin | Discussion Forum | Steve's website | Orland family website