Keith Longmore's fascination by the photographs in this memories section prompted his own vivid memories of Coventry in the late 1940s, when he was about four or five years old. In particular, Keith remembers the scaffolding and boarded walkway from Broadgate to Smithford Street, and the arcade, as well as the Food Office and some other things....

s a small child I was terrified of the walkway; through the gaps in the boards was a view of horrible green water, with lots of refuse - old crates, vegetables and so on - dropped in the open cellars by the market traders. Initially, the sides were wire netting, but later they were boarded over, as work got underway to rebuild the area of open cellars in the triangle that was formed by Smithford Street Broadgate and West Orchard. Almost opposite the arcade entrance, which was under Woolworth's frontage, was the old White Lion pub, the only building left on that side; it was a typical Victorian pub, with a large single bay window of frosted glass, with pink-red glazed bricks, and black painted door each end, and the window frame. I always wondered what was inside - it was always locked in the day!

In 1954 the White Lion pub was the only building left on the north side of what remained of Smithford Street - an ancient street which was swiftly disappearing under the new Precinct.
Photograph taken from "A Century of Coventry" by David McGrory.

The arcade holds some memories! Just inside the Woolies' entrance, on the right, was a television shop. Several large displays of early TV sets: Pilot, Philco, Ferguson, Ecko, etc., and the magnifiers and other gadgets to help one see the tiny screens. One was a back-projection set, with a 2 1/2 inch tube a way behind about a 12 inch fabric viewing screen.

Further down on that side were the grocers, Plevins, and then J A Summers, grocers and green grocers. Outside Plevins was a Ford 8 delivery van - prewar - that was grain all over in light oak, with gold blocked, black edged lettering. As a child, I wondered why it looked like wood, and felt like metal! It was immaculate, though, quite an advert. On the other side, the last shop was the double-fronted Hurrell's the pork butchers. Outside the arcade they had a stall selling chitterlings and pigs' trotters. Smelt delicious, however, after they were prosecuted for dirty premises, Mother wouldn't go in there again! Also on that side was the Home and Colonial Stores, Mason's (I think), and the Empire grocer's.

Woolworth's, on the south side of Smithford Street.

Through the Barracks Market and out the other side, I went with my mother to the Food Office, which was, as I recollect, close to the Geisha cafe. I remember the counter in the waiting area, where she had to collect some paperwork, and then stand in a queue to receive the books. I still remember the distinctive smell of the books, whether it was the cheap paper or the ink, I don't know.

Back to Smithford Street, inside Woolworth's store (left), the upper floors were missing, and the roof was corrugated iron and canvas, and you could see light everywhere through the gaps. By the door into the arcade was a counter selling rain damaged goods at about half price. It was always full!

Down towards St John's church on the same side as Woolworth's was a small area of market; there was a great toy stall there! On the other side, on the corner of what I assume was West Orchard, was another large pub, the City Arms. Then a few doors down, the Co-op, behind which was the framework of the new store that had started to be built just prewar. Down a ramp behind that again, the half-dozen or so stalls of the fish market.

On the bend of Fleet Street opposite St John's church was the triple frontage of Allwoods, Atkins and Turton, the large grocer's, hardware, and general store. They had a coffee roaster and grinder in a window specially made for it - polished metal and red paint - which smelt wonderful. I can still recall the smell to this day. (They had another similar, but smaller, shop complete with coffee grinder, in Earlsdon)

Then Corporation Street: I well remember the Rex market - another large toy stall there!! - and Sammy Newsome's garage, painted a dull grey with Standard Motor Company signs every so often along its length. It had almost no windows as I recall, just a blank forbidding frontage; but then, there weren't many cars to sell!

Smithford Street in 1939. This photo was taken from the upper floor of Woolworth's, looking across towards British Home Stores, and displays a bustling shopping street shortly before the Second World War began on Sunday the 3rd September 1939. If you look closely you will notice two signs indicating an air-raid shelter.
Thanks go to David McGrory for the use of this fine photograph.

A few more memories of Coventry from over 50 years ago....

During the 1940s and fifties, near where my parents lived, and on my way to and from school, I passed along the side of a house inhabited by a Frenchwoman, who often, on my way back in the afternoon, came out to offer passing kids a biscuit or a sweet. She was reputed to have been in the French Resistance during WWII, and to be the holder of a medal; word had it, a Croix de Guerre.

She was archetypal French in looks and attire - with a very strong accent - and with a very 1940s hairdo, and keeping her only companion, a small poodle. All the cats around ganged up to chase the dog round the field, behind our houses, in Lyndale Road, which was then classified as unadopted. Many times there would be an awful commotion, which was the poodle as it ran around in a wide circle, with 4 or 5 cats in hot pursuit; its owner usually had to come out and rescue it. She was obviously in her 40s when I knew her; she died of cancer about 1960, at the age of about 60 or 61. I believe that she was lonely, since no-one in the neighbourhood would speak to her if they could avoid it; people were very suspicious of foreigners in those days. It was probably to gain some company that she offered us kids some goodies when we were passing.

It would be very interesting to learn more about her, and I wonder if there are any readers of the Historic Coventry website who remember her, and could shed some light.

Another of my mother's neighbours was an old man who was also somewhat shunned by the other neighbours. He had been badly wounded in WWI, having suffered a severe shrapnel wound to his head; he tended to be a bit subject to mood changes, and people clearly found that off-putting. When I knew him, he was over 80. He had lain in No-man's land after his injury, and was picked up by the Germans, who took him to hospital, where he was treated, a silver plate being put into his head. It left him rather disfigured, but they saved his life, and despite WWII not long over, he wouldn't hear a word against them - which also didn't make him popular at the time.

The third memory is of another elderly man, who was often to be seen in the city centre. He was mentally disturbed, reputedly due to shell shock. Always dressed in a navy blue coat and kepi, with white gloves, he marched an imaginary squad around the city's streets, and also at times 'directed' the traffic. Harmless, but a sad sight.

All of these people were around into at least the late 50s, so there are probably people about today who still recall them.

Young people today do not realise how different shopping was in the 40s and 50s compared with today. Everything was measured out and weighed or counted, then packed in paper bags of one sort or another. 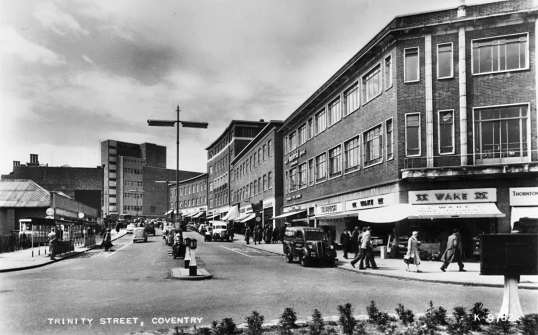 My mother often shopped at Sainsbury's in Trinity Street. All Sainsbury's stores appear to have been similar. Inside, white and blue or green tiled in typical 1930s style (coloured edging and a chequered band lower down), with a long counter down each side of the shop, with stations for each product on offer: butter, sugar, tea, bacon, etc., etc. Butter, for instance, was cut off a large block, and the cut-off piece was weighed and beaten into shape and the correct weight using wooden butter pats - paddles rather like heavy spatulas. After the weight was correct, the person serving usually added a final small extra dollop, slapped on top with the pat. It was then wrapped in greaseproof paper, and handed to the shopper to take to the till (they trusted shoppers in those days!) When all the required stations had been visited, and the goods put in a shopping bag or basket, the recipient took it to the till, stated what was bought, and paid.

Every district had it's corner shops; often I went on errands to one or other of ours, Higgs's on the corner of Whoberley Avenue and Glendower Avenue, or the post office and shops on the junction of Broad Lane and Glendower Avenue (Some of these I understand are still there), or else the local Co-op or other local shops. Everything necessary to live was locally available. Higgs's sold an incredible range of goods from their poky crowded shop, papers, firelighters, cigarettes, matches, ironmongery, stationery; you often had to ask, but it was rare that they couldn't supply. On the corner of Wildcroft Road and Broad Lane was the local Co-op.

Keith's mother would've been used to queues like this in the immediate post-war period.

A range of 1930s shops included a greengrocery (selling fish, too), butchery, chemist, hardware shop, and grocers. Like all shops, the goods were measured or weighed out on demand. Then there were dividend stamps: each purchase was entered on a small ticket in a large triplicate book, along with the shopper's share number, and the shopper was issued with the top copy. The tickets were kept, and as I remember had to be handed in to retrieve the dividend payment; I can remember adding up hundreds of them and working out the dividend.

Many everyday commodities were delivered to the door. The days of horse-drawn vans had disappeared after the war, but bakers, milkmen, bottles of pop sellers, greengrocers and grocers, shoe repairers, butchers, fishmongers, and more all delivered to the door. Our bread and cakes came from Earlsdon, delivered by the baker in his cream and maroon Bedford van, brought from the van to the door in a basket, covered by a linen cloth. A common sight, too, were French onion sellers, on bicycles with strings of onions hanging from every available point, and dressed in black berets and striped jumpers - stereotypically French! - and speaking almost no English. They came in quite large groups, and appeared every year on the dot.

I well remember being taught French by Mr. Liddiard at King Henry VIII in about 1961. One boy was heard to say something using Mr. L's nickname - Moaner. He was duly hauled up to the front of the class for interrogation. When he had done, we were told the following story: Another boy had been caught using Mr. Liddiard's nickname, and was sent to report to Mr. Shore, then the Deputy Headmaster, whose temper was somewhat legendary. Shore said "Right, what did you call Mr. Liddiard, boy?"
"Moaner, Sir."
"H'mmm. What do you call me?"
"Piggy, Sir."
"H'mmm.... how would you like four Saturday mornings?"

The tale was told with good humour, and is one of the things that still sticks in memory as if it were yesterday.